Nowadays, the term "chakra" is used a bit in all "sauces" without really knowing its meaning and meaning. We talk about it especially in the world of yoga, the goal being to open our chakras to release blocked energies and our mind.

Our western world has accustomed us to reason and analysis. Our Cartesian mind demands proofs and numbers, and medicine is primarily focused on our physical body. Oriental traditions and medicines have developed thousands of years of knowledge based on observation and experience. This is how knowledge about an energetic anatomy and not just a physical one has come down to us and is the subject of increasing interest among Westerners. There is thus always more enthusiasm, among others, for yoga, meditation, Ayurvedic or Chinese medicine. As if the human being has understood that he is part of the infinitely large and the infinitely small and that everything is interconnected.

The chakras are thus part of a very complex energy system that allows our energy to flow and transform behind this material appearance represented by our physical body.This energy system is essentially made up of three fundamental elements:

These three elements are interrelated and their main purpose is to circulate the Sanskrit term "prana" meaning absolute energy or "chi" for the Chinese. It manifests itself in particular through breathing, allowing us, among other things, to assimilate prana. We are therefore going to focus on the 7 main chakras. The word "chakra" in Sanskrit means "wheel". It refers to the energy centers that make up our consciousness and our energy system. These centers function as rail yards, valves or pumps that regulate the flow of energy from our energy system. The functioning of the chakras reflects our decisions and our ability to adapt to life. They lie along a vertical axis located on the front of the body. In most of us, the chakras are said to be about four inches in circumference and follow a rotating motion, hence their name "wheel". Their animation makes them shine. Orientals often speak of lotus flowers which can be divided from 4 petals (1st chakra) to almost 1000 petals (7th chakra).

The division of its flowers into several petals represent the nadis or energy channels, through which energy enters the chakras, to be transported then to the subtle bodies. It is from the first chakra, the root chakra, that the force of the cosmic creative energy called kundalini "coiled like a serpent" flows. When this energy is present, it rises in each chakra bringing its vibratory force more and more powerful while rising upwards to reach the crown chakra (7th chakra).

This vibratory force allows us to access during our evolution all the capacities and active forces on the various energetic and material plans of Creation in order to integrate them into our life. Another force here, that of the energy of pure divine Essence, runs in the opposite direction of kundalini. It penetrates the crown chakra and descends towards the root chakra. It ensures that Man can recognize in all phases of his existence the immaterial aspect of God as the unchanging Source of the instigation of all manifestation. This energy is mainly intended to dissolve blockages located in the chakras.

We can also consider our chakras as the subtle sense organs, serving both as receptors for all energetic vibrations and for all information hovering above the physical plane but also as energetic diffusers. In addition, each chakra is linked to physical and glandular areas, to colors, sounds and light.

Thus, thanks to the chakras we are able to emit healing vibrations or conscious or unconscious messages which can thus positively or negatively influence human beings, all living species, situations and even matter.

To be able to live in harmony with oneself and fully attain the capacities of one's personality by having integrated both the strength and the creativity, the knowledge, the love or the bliss that result from it, all of our chakras must be open and collaborate harmoniously between them. Otherwise, there is imbalance and dysfunction which can lead to physical, emotional and spiritual disturbances. The energy of the chakras is not static. All combinations exist between the chakras, either open, blocked or unilaterally developed, their values ​​change over the course of life.

Knowing the chakras and giving ourselves the means to open or balance them can prove to be invaluable in our personal, physical, emotional and spiritual development. 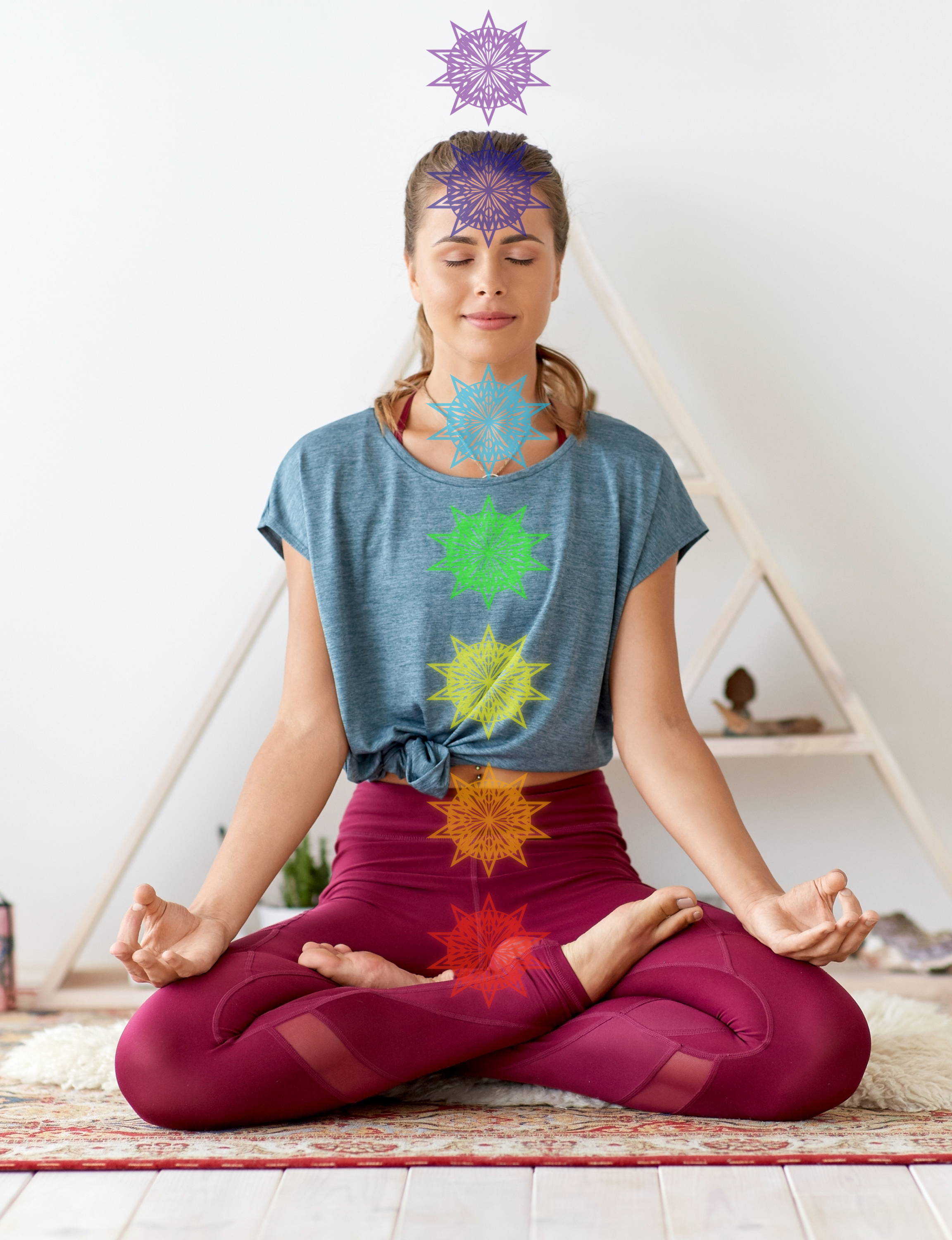